Friday kicked off with peer learning circle meetings to discuss capstone projects and engage in a morning activity related to processing change. Throughout the MARL experience, our peer learning circles have been a great asset, allowing each of us to bounce ideas off one another and forge connections with others who can provide feed-forward. To tie it together, the last content presentation addressed group dynamics. This complimented our first day topic related to effective meeting facilitation, as group dynamics certainly play a critical role in accomplishing a necessary task at any successful meeting. 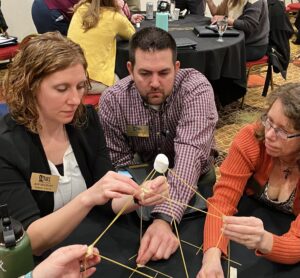 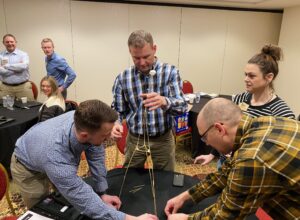 As the Seminar Management Team, we identified three key themes with which we left the St. Paul seminar. 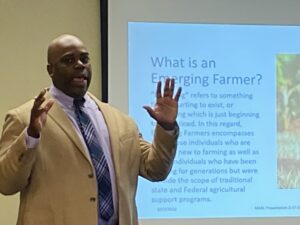 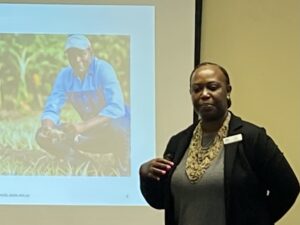 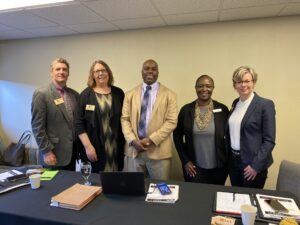 Thursday kicked off with a presentation by MDA Assistant Commissioner, Patrice Bailey and MDA Emerging Farmer and Outreach Coordinator, Lillian Otieno. They shared key aspects of the new initiatives aimed at assisting emerging farmers who often have far greater struggles entering agriculture than individuals with prior familial connections to production agriculture. They described how these, and other efforts, are focused on increasing and supporting diverse beginning farmers. 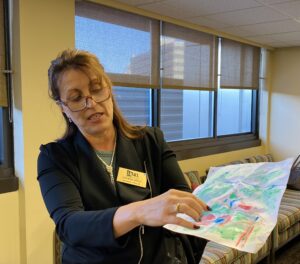 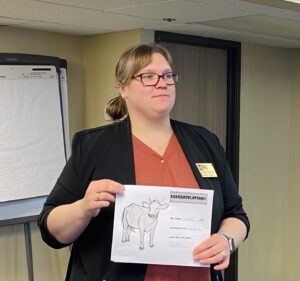 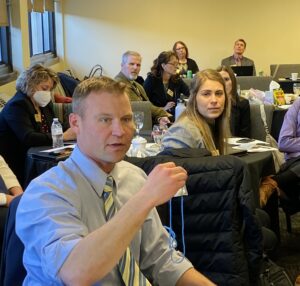 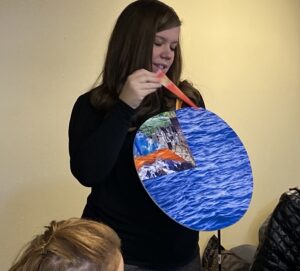 Following a brief networking break, Sue Knott and Keri Sidle from Minnesota Agriculture in the Classroom (MAITC) provided an overview of their mission and resources that MARL participants should know about. They engaged small groups of MARL participants in trying out agriculture teaching activities that could be taken into local K12 classrooms to promote agriculture. Several class members have immediate plans to make connections with local teachers and share their passion for agriculture in this way. 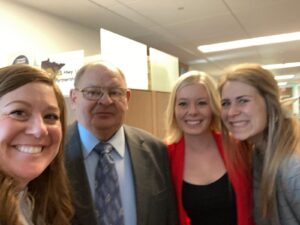 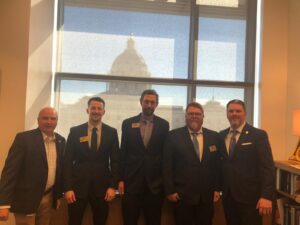 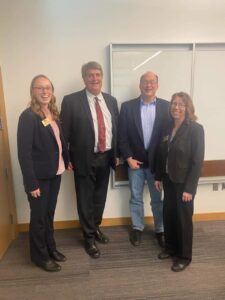 Members of Class XI coordinated their individual and small group meetings with their district’s legislators early afternoon. It was impressive to see you much time several legislators spent with members, listening, sharing openly, and encouraging all to reach out and stay in touch. Members later shared how authentic and real their conversations unfolded. A very exclusive and meaningful experience. Thanks to all legislators who allowed this to happen! 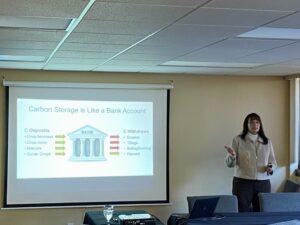 As members were coming and going to the Capitol for their meetings, there was alternative programming offered for those present. A small group coaching session, as well as a session on Carbon Credits in agriculture by Extension Specialist Jodi DeJong-Hughes. 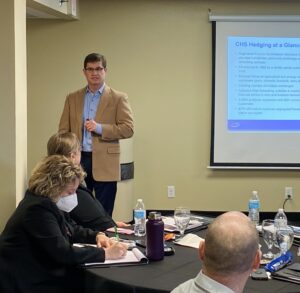 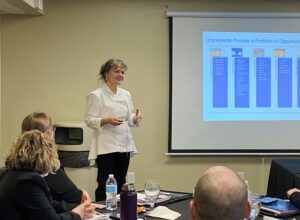 To conclude programming for the afternoon, Patricia Williamson, Principal Scientist at Cargill and Nelson Neale, Vice President of CHS each shared a brief presentation about themselves and their organizations, followed by Q&A. Both Cargill and CHS are great examples of the important role that agriculture and food industries are to Minnesota, and what the Twin Cities has to offer in terms of ag and food career opportunities. Both Patricia and Nelson shared their individual passions, yet collectively put into perspective how the work our state does in agriculture has a global impact. 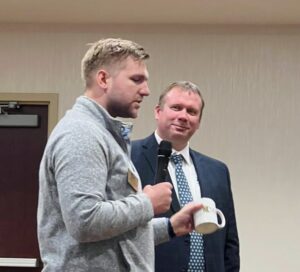 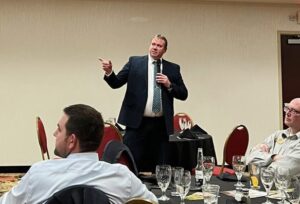 Thursday evening was the social event and banquet at which several past MARL class members and key stakeholders were present. The keynote presenter for the banquet was Bill Gordon from MARL Class IV. His keynote presentation highlighted his own international MARL experience, encouraged our class to maintain an open mind when going to Ecuador, and ensured MARL Class XI was prepared with a growth mindset. He used his experience as the President of the American Soybean Association to communicate this valuable messaging.

MARL Class XI engages with legislators, educators, and others in St. Paul

Seminar 10 of MARL Class XI was recently held Wednesday, February 16 through Friday, February 18 in St. Paul. While this seminar typically would have been held earlier in MARL programming, prior to the Washington D.C. experience, the sequence of experiences and seminar locations was changed to allow for this critical seminar to be held in person, as opposed to in a virtual setting. A total of 26 MARL Class XI participants attended the three-day seminar, primarily held at the newly renovated Capitol Radisson.

Wednesday was a packed half-day experience, beginning with a short briefing and preparations for the upcoming international trip to Ecuador. Given that this is the final seminar prior to our departure, we asked any pressing questions and received our headset which will assist with hearing presenters and translators. From this briefing, it was clear to sense the excitement and nervousness of cohort members regarding what lies ahead. 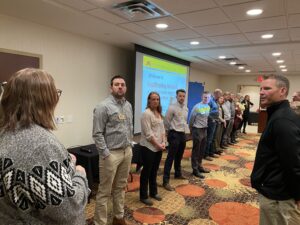 Seminar content then began, focusing on providing effective leadership for meetings and committee work. Knowing that an average American spends approximately 4 hours a week in meetings, while an average executive spends 23 hours a week in meetings reiterates the value of strong meeting preparation and facilitation. In this afternoon session, we learned how to get the most out of meetings and facilitate different meeting situations and behaviors successfully. Various tools were modeled for MARL participants and we engaged in interactive learning experiences to try them out personally 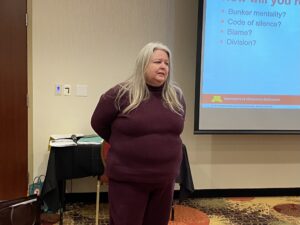 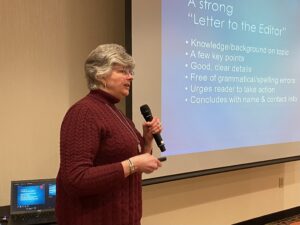 Following the session on facilitation, two guest speakers presented to our cohort. Allison Sandve. News Media & Public Relations Manager for UM Extension spoke about how to communicate key messaging in a crisis. In small groups, we roleplayed a scenario to put into practice the content. Paula Mohr, Editor of The Farmer and MARL Class VI participant, provided a look into why and how to successfully write a letter to the editor. She highlighted keep steps to getting published and emphasized that writing a letter to the editor may be a good way to communicate about an issue of importance to an audience we may not be currently be engaging with. 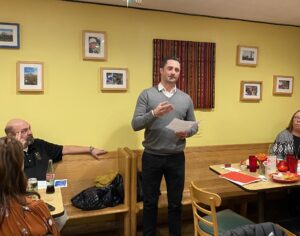 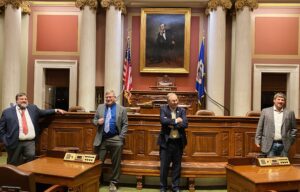 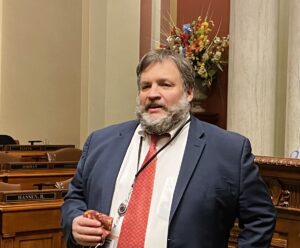 After dinner as a class at Chimborazo, an Ecuadorian restaurant – to prep for the upcoming Ecuador study trip-, we transitioned to a guided nighttime tour of the Capitol. This was a highlight for many, with few having the opportunity to see the Capitol and learn about its rich history before. Brian Pease, who works for the Minnesota Historical Society, shared information about the history and architecture of the Capitol. Because this tour happened after hours, we were given us a unique perspective without the hustle and bustle of crowds and activities, and truly had a chance to take in the beauty of the facility. At the conclusion of the tour, we were greeted by a panel of three legislators (Rep. Paul Torkelson, MARL Class IV; Rep. Paul Anderson, and Rep. Nathan Nelson, MARL Class VII) and Minnesota Department of Agriculture (MDA) Commissioner, Thom Petersen. Each shared their agricultural connections and leadership journey and responded to a wide range of questions regarding leadership, persuasive style, and life before/after public service. 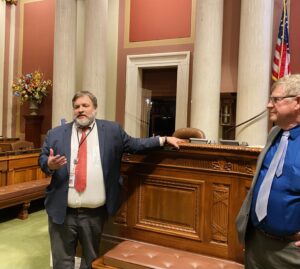 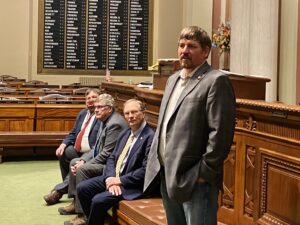 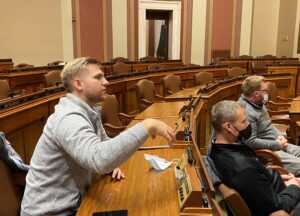