We woke up to a row of bikes waiting outside the hotel. We took a bike tour around some of the rural sites in Hoi An and finished the day with a fishing tour on the Coco River. We were guided by Jack Tran of Jack Tran’s Ecotours. Jack began his business eleven years ago and takes advantage of local sites for agro and ecotourism. First, we biked through rice paddies to an organic vegetable farm. This land is leased to the farm by the government, but rather than growing rice they are allowed to grow fresh vegetables. We were met by some of the farmers who showed us how to water their vegetable plots by hand. They use dried seaweed as fertilizer and cover the planted seeds with sand for protection and moisture retention. 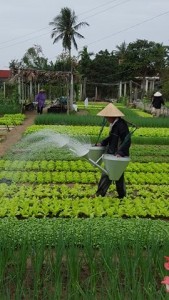 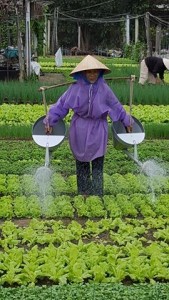 We continued biking along the scenic rice paddies and met a water buffalo named Xe. Xe gave many of the class members a ride- some even rode him in the water. 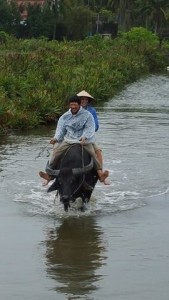 The class biked to the Coco River where we boarded Jack’s fishing boat. We traveled along the river to back canals created by the propagation of palm trees by the North Vietnamese Army during the Vietnam War. These canals were occupied by Viet Cong soldiers that hid under water by breathing through bamboo straws. We also had a chance to ride basket boats through the canals with some of the local people employed by Jack’s business. 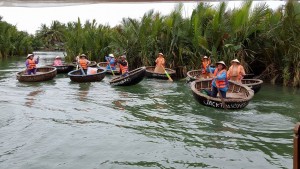 After the basket boats we docked at a fishing village where we learned different methods of net fishing. We completed our ecotour with a lovely meal prepared by Captain Cook, Jack’s father, and his staff. We were served shrimp spring rolls, rice and tuna, stuffed squid and Vietnamese pancakes. After the tour we were given some free time to enjoy the evening in Hoi An.