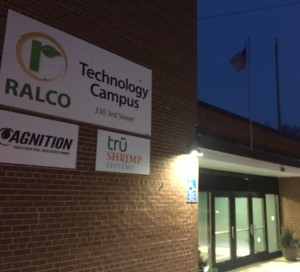 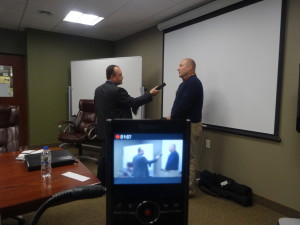 After two full days of learning at Southwest Minnesota State University, the Class IX crew traveled to nearby Balaton, Minnesota for day three. Although it only boasts a population of 630 people, Balaton is home to one of southwest Minnesota’s premiere agriculture companies, Ralco Animal Nutrition. Ralco was generous enough to allow the group to meet at one of their facilities. 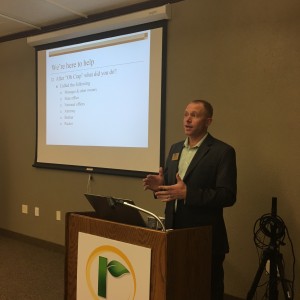 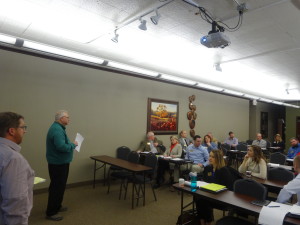 Morning programming began with some housekeeping items and upcoming assignments. Once complete, Lynn Becker, MARL Class II, led off by telling his story surrounding crisis communication. Lynn’s real-world example of how to effectively communicate during a crisis situation was a great introduction for the rest of the day. 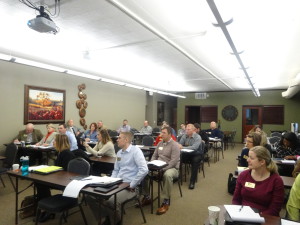 Following Lynn, Lon Tonneson of the Dakota Farmer was kind enough to spend some time giving pointers to the group on writing letters to the editor. This interactive segment featured a whole host of questions. Lon answered each question from the perspective of a newspaper editor, himself. It became quite clear that many within the group took great interest in writing letters to the editor, but haven’t done so to this point.

Although shrimp might not be the first thing that pops into your mind when thinking of southwest Minnesota, but it will soon grow the list of Minnesota agricultural exports. Tru© Shrimp Systems is one of the latest advancements Ralco has to offer. In the coming future, Ralco’s shrimp facility in Balaton will begin producing commercially grown shrimp using the most advanced technology within the shrimp industry. 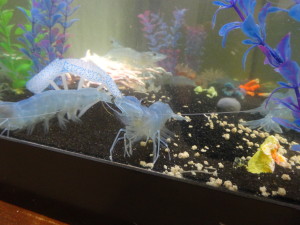 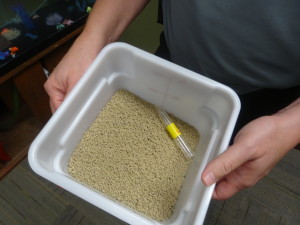 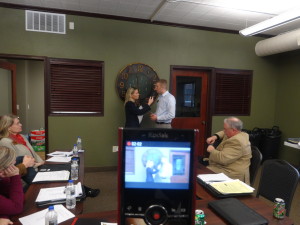 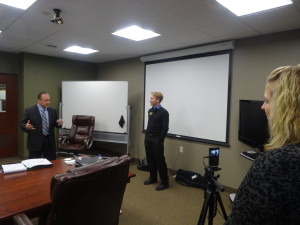 Kristin Harner, MARL Class II, rounded out class presentations for the day. Through her communications experience with the Minnesota Farm Bureau, Kristin gave the class great tips on how to handle a crisis situation. Following her presentation, Kristin helped lead an impromptu crisis communication activity. She was joined by past MARL Board Member Jeremy Geske, Lon Tonneson and Heath Radke of MARL Class VIII in administering the activity. Participants quickly found themselves outside of their comfort zones by being put on the spot in answering questions surrounding a hypothetical crisis event tailored to their professional workplace. While other classmates took their turn participating in the activity, Carolyn Olson spoke with Class IX members on her experience as an active blogger and social media user. 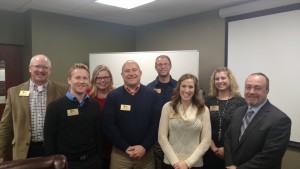 Before another snow storm moved in, the group ended the second session in traditional MARL fashion. Each participant shared a quick word on what they took away from the three-day session. Now the group is onto St. Paul in January!

Lead through listening. When we think of leaders so often the image is of an important, successful person standing at a microphone and talking to a crowd. That’s not really leadership though, or at least not the whole picture. True leadership is about listening, not talking. 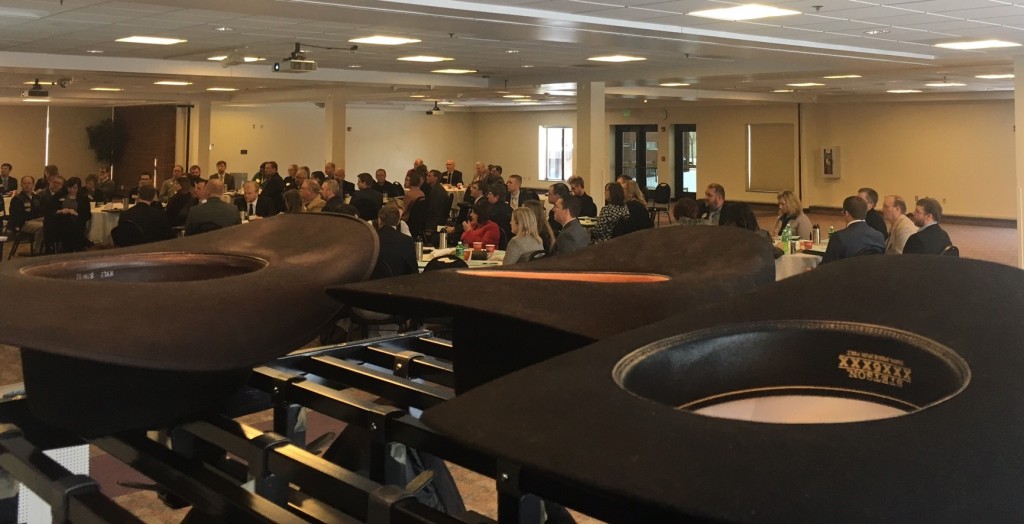 That was the central theme of Day 2 in Marshall, where we were joined by our colleagues in the South Dakota Agriculture and Rural Leadership (SDARL) program for a day of training and thinking led by Michael Brandwein. Michael has been helping form the next generation of agricultural leaders since the beginning of both MARL and SDARL, and he was a fantastic keynote for our time in Marshall.

Almost all leaders have one thing in common: the ability to communicate. Leaders are generally able to express their thoughts confidently and coherently. Great leaders can do that and more, drawing out and listening to the thoughts and opinions of others. Michael led our classes through a series of exercises meant to teach us how to really listen to each other, finishing with an exercise that challenged us to do so yet demonstrated just how difficult this will be for us to put into practice. 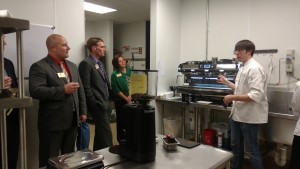 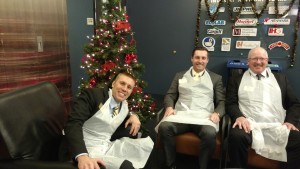 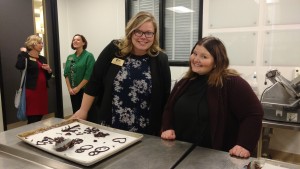 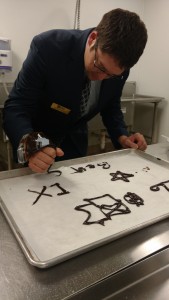 We had the chance later, however, as we toured the culinology department at Southwest Minnesota State University and asked questions of the students pursuing their degrees in culinology and hospitality. That was followed a wonderful banquet sponsored by Rabo Agrifinance and emceed by Brian Brandt (Class I, or as he liked to call it: “First Class”) where we heard from Marty Seifert about how different towns and regions are adapting to changing times. 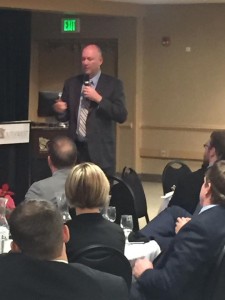 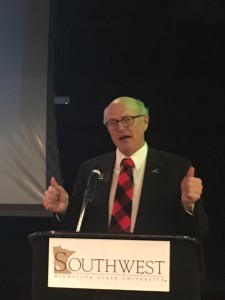 Special Guest Professor Emeritus Dr. Dan Gee, Co-Founder and past director of the MARL Board 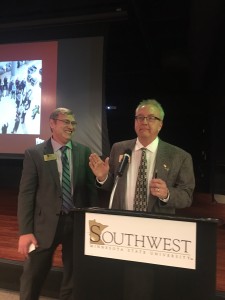 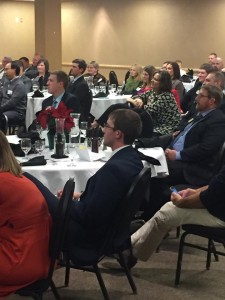 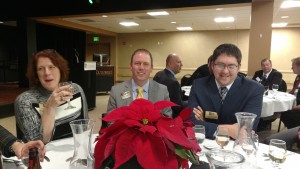 Then we said goodbye to our classmates from SDARL and turned in, to sleep and get ready for another full day. 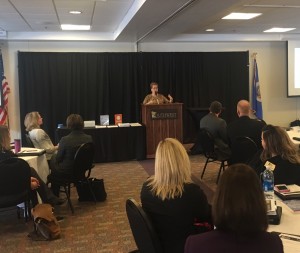 Session II kicked off in Marshall, MN at the Southwest Minnesota State University campus.  With weather moving in again- we have officially been named “The Snowstorm Class”!  However, Day One was not too bad being inside where it was warm.  We were welcomed by SMSU President Dr. Connie Gores and had a lesson in the history of the school and the diversity of the students enrolled. After lunch, we broke into groups based on our state districts and did some pre-planning for making appointments with our MN Senators and MN Representatives.  Next month at Session III in St. Paul we will be meeting with our elected officials and getting a taste for that process.  We also did some preliminary work on determining which organizations we want to visit with when we venture to Washington DC in February. 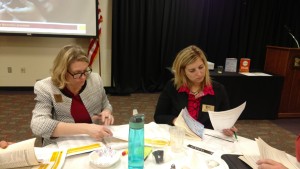 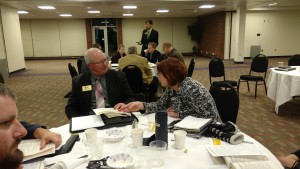 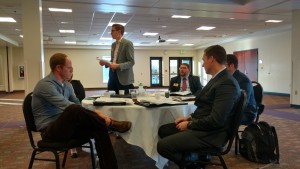 We spent the next three hours learning about ourselves with Catie Rasmussen, an Extension Educator with the University of Minnesota.  Prior to this seminar in Marshall, Class IX had each taken an Emotional Intelligence test.  Catie covered in great detail how this test can be interpreted and how it can be used by us going forward in our lives, both personal and professional.  We were then given time to look over our results and reflect on them, first on our own and then within our Coaching Groups.  This was especially insightful as we were able to talk with each other on what our scores were and offer insights into why we think we are that way.  Our group members offered us advice on ways we might be able to address some of the areas that may have concerned us and we could encourage each other. 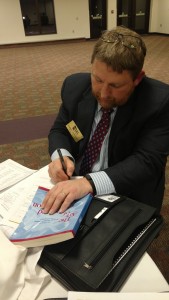 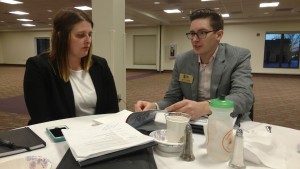 Our next step was to reflect on our homework from last seminar- reading The Art Of Focused Conversation.  It was great practice in being able to actually frame a conversation and ask the right kind of questions to see results.

Our day ended at the Brau Brothers Taproom where we were finally able to share our Storyboards with one another.  This was supposed to be done in Willmar but due to the weather situation last month we had to forgo the storyboards until this seminar.  This was an especially fun part of Session II, learning about each other and seeing pictures of our families and hobbies.  It opened the door for some great conversation and helped us to find even more common ground with each other. 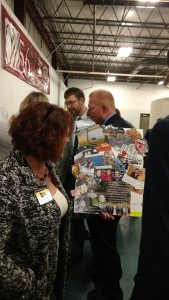