Day 3 began by traveling to The Yellow Farmhouse outside Waxahatchie, TX, where we were treated to a fabulous breakfast by John Paul and Heather Dineen. John Paul and Heather run a farm to table operation where they raise beef cattle and process it into retail cuts to sell at their local farmer’s market. They partner with local farmers to also provide farm fresh eggs and milk. They have been instrumental in ag education for a number of years starting with corn mazes, pumpkin patches and hayrides. They grew into milling their own grain into flours and meals and subsequently developed baking and brownie mixes. They were also marketing their own branded beef. Once their daughters graduated, they chose to concentrate on the less labor-intensive beef retailing. They have grown that to sell a number of retail cuts out of their own refrigerated trucks. As a result of a farm accident that took their son’s life, John Paul founded the Texas Agriculture Memorial Foundation that designates a day to honor the lives and sacrifices of famers and ranches in their efforts to raise food and fiber.

We found the Dineens very forward thinking and willing to change/grow/adapt and try new things. They were very servant minded, humble and extremely passionate about their profession as they shared a personal farm tour and their story with us. 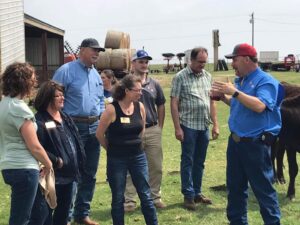 Next, we traveled to Sanger, Texas where we met Garrett Spigner, a first-generation row crop farmer who was mentored by Lewis Trietsch. It was inspiring to see the mutual admiration and respect between the younger and older generation. Garrett raises corn, milo and wheat as well as a few beef cattle. It was interesting to note that we grow the same crops but in vastly different conditions. Sugar cane aphids and feral hogs are not in Minnesota vocabulary! Garrett also travels around the state doing custom harvesting of wheat, milo, corn and cotton when his own crops don’t need attention. Engaging conversations were had among all of us throughout the day. We continued our conversation around a mid-afternoon meal at the Trail Dust Steak House in Sanger. 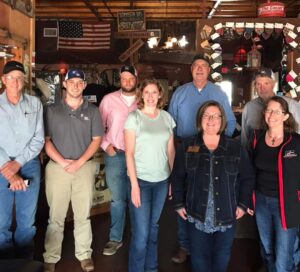 Texas Farm Bureau truly rolled out the red carpet for us with their amazing southern hospitality and generosity. We have gained friendships to last a lifetime. On our return trip to Oklahoma City, we spent time practicing our introductory stories and reflecting on our MARL experiences. We also got to know one another a lot better!

While grateful that the Ecuador study tour could happen despite the uncertainties due to the pandemic, it did make it impossible for a few to travel along. As leaders do: this small group developed an alternative plan with a domestic destination, with similar goals and leadership competencies. Due to the highly unusual circumstances, the alternative trip was approved and supported by the MARL administration and Southwest Minnesota State University (SMSU). Read here how a few MARL Class XI participants traveled to Oklahoma City, on this special self-study tour.