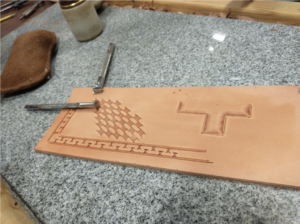 We journeyed north out of Oklahoma City for Day 4. We started at Collier’s Custom Leatherworks in Ed-mond, OK. Bret is a third generation leather worker. His grandfather handed down the tools to his father and now he has them. He makes a relatively small variety of products, which was a suggestion for anyone wishing to start out. Find something you like to do; go to some classes and watch those that are really good at it and then pick a niche for yourself. His niche is mostly gun holsters and he markets them through a number of shows a year. He also makes check book covers and Bible covers (which he can make to order!) Nada is looking into that for adding a brand to her Bible cover; she’s pretty excited about the possibility! Bret demonstrated how to cut leather strips for belts and showed us how a number of his tools work. He also explained that leather hide is often split into several layers; the top of which is smooth. The remainder of the layers are the underside of the hide—which makes suede! Learned something we’d always wondered about! When wanting to “shape” leather, Bret will oil it and then clamp it for awhile to sort of “mold it” into a new shape. One of Bret’s specialties is a full leather notebook cover. He can usually get a dozen or so out of one hide. 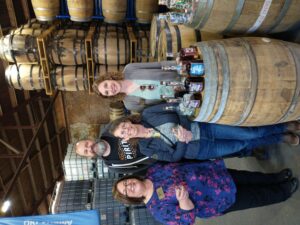 Following our time with Bret, we ventured to Guthrie, OK where we met Edmond Bonjour, Director of the Oklahoma Ag Leadership Program. Edmond met us at WanderFolks Spirits, a distillery specializing in gin, whiskey, vodka and liqueur. Did you know that all bourbons are whiskey—but not all whiskeys are bourbon?? We didn’t! WanderFolks gets its name from all the folks that have “wandered in” from other ag industries. Distillery manager, Daryl Vencl, formerly with Winfield United, currently oversees a small staff that does small batch distilling using mostly corn, wheat, rye and barley. They currently have three labels that they’re selling under: Garden Club, Same Old Moses and Prairie Wolf. They have used a chef flavor database to help determine some of their botanical ingredients. They must be on the right track since they just re-turned from a major Spirits competition in San Francisco where they medaled with six of their products! Taste testing went very well and a few bottles returned to Minnesota!

Next we ventured to Stillwater where we had lunch and fine conversation with Bill and Shonna Richardson, co-owners of Persimmon Hill Farm and Bakery. We had 27 layer croissants filled with chicken salad that was incredible! Persimmon Hill grows much of their own produce on their farm and then produces end products in their commercial kitchen. They determined that people were not as willing to travel out of town to find their products, so last year they bought a building and are bringing the products into town instead. They are trellising blackberries, growing a number of fruit trees and harvesting honey as well. 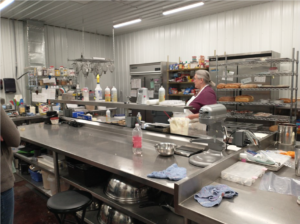 Next we traveled to Oklahoma State University’s Food and Agricuture Products Center. There Chuck Willoughby gave us a great tour of the facility. Similar to Minnesota’s Agriculture Utilization and Research Institute, FAAPC helps fledgling ag businesses get a grounded start. They have put on a number of workshops detailing what all is entailed in starting an ag business. From 1500 people they’ve spoken to, approximately 10% have started a business with about a 60% success rate. Given that 50% of conventional start-ups fail in year one and 93% by year two, 60% looks great! When things were slower due to Covid, they got creative and helped back-fill for processors unable to keep up. They also worked with the Department of Corrections to make food that was consistently sized for the inmates so that fights didn’t break out over differences. 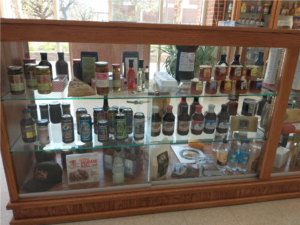 They work with companies to develop a business plan, research trademarks, explore good management practices and more. When asked what skills are in most need (other than money), Mr. Willoughby stated that people need tenacity to go the distance and to be open-minded enough to be able change direction quickly.
We rounded out the very busy day with a social with Oklahoma Ag Leaders at a nice Mexican restaurant in Stillwater. It was really nice to be able to connect with other leaders. Kim even got to visit with a previous co-worker! It’s a small world.